Re-Learning Beauty: of book covers, and styling, and life, oh my!

The decision to self-publish my poetry ebooks came with a rush of exhilaration, excitement... until I realised the books would have to have excellent covers to capture the attention of my readers.
Now, one would think a creative author would have no problem designing creative covers, right? So wrong...

Once I got my BookCoverPro software in the oven, I began the process of baking book covers, one after the other. Now, I thought I'd be able to do them really well. I was pretty proud of the first cover I produced anyway.

But when my sis passed me by as I sat staring triumphantly at the computer screen, she expressed her thoughts with something akin to "Yuck!"...

And thus did my bubble burst. It really was a sickly green I'd thought off for that first cover, I admitted.

Down plopped my sis on the seat next to me, and pointed out the lack of imagination and charm in my beautiful baby (er, cover).

"I'm trying to make it modern, make poetry appeal to a new generation!" I protested.

"Nah," was my sister's frank response. "That cover's old. And dull. And boring."

At this point, it is essential that you understand something. My sister and I are both writers, but she has always had that extra something creative when it comes to beautiful things. She spots 'em, she hoards 'em, she wears 'em, and darn it, she can design them as well apparently. And for this reason, I wisely ignored the desire to slap her silly and invited her to brainstorm cover ideas with me.

Courtesy of her helpful input (and *ahem* a lot of my own ideas as well:DD), the cover began to resemble something pink and flowery. Pretty in pink EVERYWHERE.

That was way too feminine for me. And so, (we're getting warmer), I insisted on some green, like this:


It was clear we both liked this cover- but something wasn't quite right, and we had to play around for a bit, tweaking and experimenting until, finally - some agonising minutes later- we hit paydirt!

The entire process took a little over two hours. And I was blown away enough to release all my poetry ebooks with the same cover in different colours:) Here's 'In the Madness of Meeting' in purple, and 'Just Imagine' in blue:

After this windfall of gorgeous book covers, something hit me... We're all really like books, aren't we? Only our personal styling forms our 'book covers', translating our inner person to the outside, and attracting others to us along the way.
Which is why, in the same way a book cover advertises the content of a book, it's probably smart to style ourselves with the vision of who we really are inside.
Now, why this only occured to me now, I have no idea. I just didn't go through the typical girlie age that so many of my contemporaries (including my sis, who seems to have never left that age:D) went through. She, for one, truly appreciates beautiful things in all their forms, including clothes and accessories. Styling an outfit is something she's always enjoyed doing, and she truly has an eye for unique, beautiful objects to decorate a room. Or herself:)

Me, I liked beautiful things, but only in passing. They never held a pivotal role in the way I lived life.
But now, I see that though inner beauty is the most important, integral element in building a personality, internal beauty should be translated into outer beauty to give those looking in from the outside a chance to see what getting to know you might be like.

As shallow as it sounds, everyone judges a book by its cover, even if they deny it.

Well, maybe if they're marooned somewhere with a really awful book cover-ed publication, they'd pick it up and fall in love with it, regardless of its outside shell. But let's face it... how many of us get marooned on some island with only a single book to read (metaphorically, I mean)? In reality, we're always in the company of others, whether it's at work, with family or with friends. And it helps those who're passing by the great human bookshelf if our cover somewhat matches what's inside.
To do this, of course, it would be good if we could figure out our own selves enough to reflect the right cover - as my sis put it, the reason she disliked my initial book cover ideas were because they didn't match the imaginative vision and charm of my actual poems, something which the final covers convey pretty accurately.
There's a time for everything though. Like the layers of a book cover, it's only right to spend lots of time building the foundation for who you are before reaching a point where you can effectively learn to adorn your outer self to match what's within, re-learn beauty in a way that makes it relevant and accessible to who you are as a person.
I've always been obsessive by nature, learning as much as I can about one thing before moving on to the next. Yes, like a layered book cover, indeed. Or an onion:) But now that I feel my inner self's foundation is well-established, it's only natural to move on to the aesthetics of external beauty. As my book covers were carefully built from the inside out, it's time to re-learn my own beauty so that I can style myself with the appropriate effort and taste.
I just hope I succeed in approaching the beauty of my final book cover though, instead of staying mired in the dullness of the first.

One really never knows when it comes to something as ephemeral and hard-to-pin-down as beauty:)

Re-Learning Beauty: of book covers, and styling, and life, oh my!

Posted by Isabella Amaris at 10:02 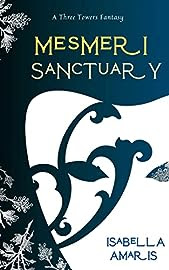 Paperback Edition: Amazon Ebook: Kindle US I Kindle UK I Smashwords I Barnes & Noble I Kobo

Isabella Amaris
Author of YA and romantic fantasy, poetry and short stories.

Sign up here to receive free blog updates in your email!